Come sweat
and train with us

15+ years committed to practicing and studying karate-dō. As a dedicated partner and charismatic friend, he strives to help people grow and connect with their bodies. 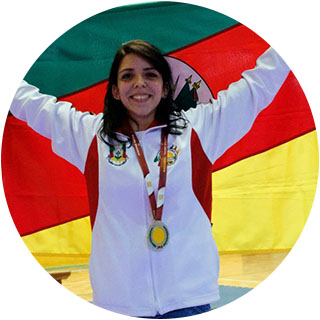 The fist that makes everything moves smoothly. Easy smile and great energy — always up for a kumite bout.

3rd kyu brown belt certified by the JKS Brazil, training under Tiago Frosi sensei (former president of JKS Brasil) and now under Haupenthal sensei. Active member of the Shinjigenkan Institute since before its establishment in 2012, in Brazil.

Haupenthal sensei started his karate-dō practice in Brazil and spent 15 years broadening his knowledge and skills, training and competing under both olympic / WKF and traditional JKS (Japan Karate Shoto Federation) circuits. Several times provincial medalist has competed in the national level many others.

He has also helped coaching teams and athletes in provincial and national competitions with great success. Now, he dedicates himself to study and teach karate-dō with emphasis on self-development.

As an active member of the Shinjigenkan Institute, Haupenthal sensei has also focused on helping people not only to become physically stronger but to create a deeper body-spirit connection — to unlock and empower their true potential. Among other activities, he endeavoured in healing circles, therapy with non-ordinary/holotropic states of consciousness, men’s psychology groups, and guided meditations.

Haupenthal sensei opened the Shinjigenkan Institute Canada in 2018. The dojo is growing, connecting and building relationships, and have among its partners the Japan Cultural Association of Manitoba (JCAM), Manitoba Japanese Cultural Relations (ManitobaJCR), and Adachi Japanese.

Sadamu Uriu shihan is the current honorary chief director at JKS Brazil and achieved his 9th dan as recognition for a life dedicated to karate-dō, rank only shared with Masao Kagawa shuseki shihan — chief and technical director of the Japan Karate Shoto Federation – JKS and national coach of the Japan karate team (JKF).

Start Today
The instructors are the best!! Pretty common for people to be afraid of trying something new but Gui and Nay make you feel so welcome 👍👍

Aleeya L.See on Google
I’ve never met anyone as passionate about karate as Shinjigenkan Canada. They have created a warm, inviting environment for all kinds of learners to learn traditional karate. These people don’t mess around!

Alison A.See on Google
Great dojo to learn at.
Sensei is knowledgeable and patient.

Damián C.See on Google
Previous
Next