Commonly translated as the rules for how to behave at the dojo (Dōjō = Training Hall; Kun = Rules), Dojo Kun is a series of axioms (unquestionable truths) which helps the practitioner to develop character — the principal objective of Karate-Dō.

Words to live by

We were not lying when we said that training karate will change your life. Practicing Karate-dō is much more than punching and kicking, it is opening your life to constant growth, improving your body, connecting with others, and becoming a better person.

These five rules are elementary by design, and for that, extremely hard to follow as they touch everything we do.

A life lived by the Dojo Kun is a life guided by direct principles you can measure our actions against. At any given time, we should be able to rethink our actions based on these ideas, and the answer to our questions will become clear.

At the Shinjigenkan Institute, we follow the “Shotokan Dojo Kun” adapted from Bushi-Do — the Way of the Warrior — and we encourage our members to do so through physical, spiritual and emotional training.

Each Kun starts with Hitotsu (一、), meaning “First”, emphasizing that there’s no difference in importance between them — they are all essential and connected to each other. Yet, they were written in a given order, and this is fundamental to understand and practice these principles.

A word from Funakoshi Sensei

According to Gichin Funakoshi Sensei, the practice of courtesy shows the difference between other “fighting techniques” and Budo – the martial way – in which respect to courtesy is the foundation to getting better, more skilled. Therefore, Dojo Kun is a motto you choose to live by, not simply a rule.

The following are the five Dojo Kun, as explained by Shuseki Shihan Masao Kagawa, 9th Dan and Technical Director at the Japan Karate Shoto Federation (JKS). The English translation was review and adapted by Gui Haupenthal sensei along with a version in Portuguese by Tiago Frosi sensei.

Shotokan no Dojo Kun — The 5 Axioms of Shotokan Karate

Build up and improve character

The ultimate goal of karate is to seek perfection of character through intense daily training by cultivating discipline, courtesy and effort.

To respect other people, their individual personalities, during daily training is difficult but necessary, and only though that we start developing the fundamental human character.

The other four principles of the Dojo Kun are the methods of which to achieve this goal.

Be straight and honest

Be sincere in everything you do. Always honour your words; if you said it, do it. If you want to earn other people’s confidence, it is fundamental to keep promises and avoid lies.

Just like your words, so are your actions. Everything in karate should also be performed with sincerity; a technique should not have mixed intents.

You have to try harder. Nothing can be achieved in theory, and you can’t be successful without being diligent. Face what you have decided to do and apply all of your efforts to accomplish these goals.

Remember that you have to be sincere; this is the only way you will be able to keep focused and determined on what you are pursuing.

Courtesy is the manifestation of pure and kind human nature; it is the root of order. You should never forget to be kind.

Gratitude and respect to your opponent (and to yourself) should be the norm. Even when facing an opponent, you should be thankful for the opportunity of the challenge.

Real women and men project civility in their acts and behaviours. You should never neglect courtesy.

Being impulsive and trying to win at all costs is wrong. Losing your temper and lashing out after a minor incident is nothing but folly — you are not brave, not fearless, nor heroic. In fact, humans tend to be egocentric, and these behaviours are only a reflex of this characteristic.

Violent people may think they are brave, but seen from the outside they are nothing but insignificant, even comic.

If you practice karate and get angry over trivial things, you will disgrace the name of Karate-dō. Even in anger, there should always be room for a sincere smile.

As we explained, these five rules are very simple and, for that, extremely dense and hard to follow. However, we invite you to try measuring your actions against the Dojo Kun.

Your life will change, and so are you. 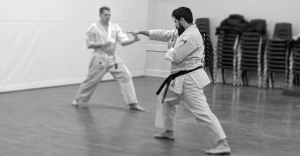